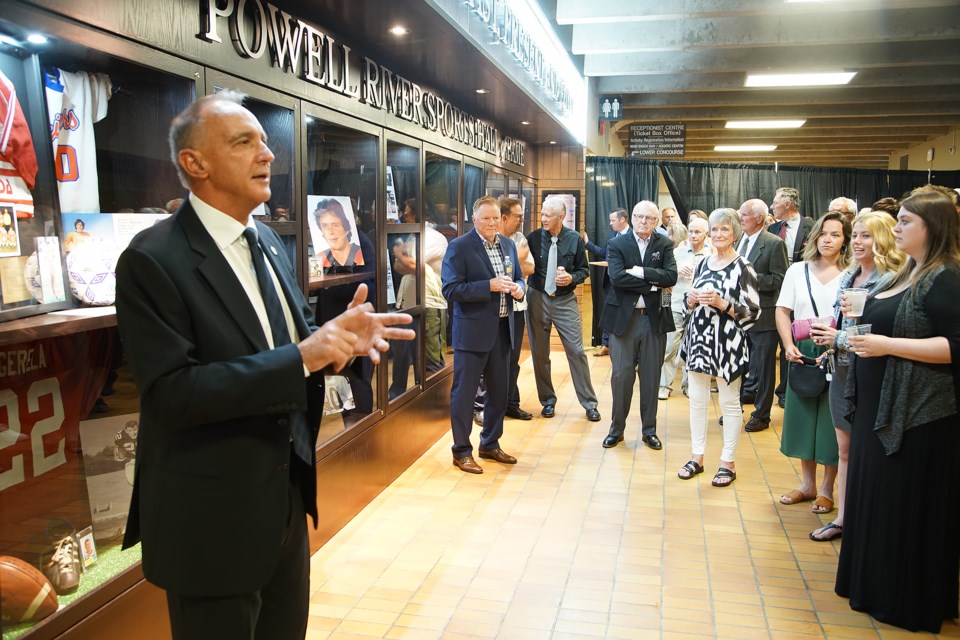 FUND CLOSED: Councillor Jim Palm [left] spoke at the inaugural Powell River Sports Hall of Fame event in 2019, and at a recent city council meeting, wanted to ensure that a dormant sports reserve fund be allocated to the next sports hall of fame induction.Peak archive photo

City of Powell River’s sports and recreation committee reserve fund is to be closed and the money transferred to the innovation fund reserve. Councillor Jim Palm is adamant that the money be used for the sports hall of fame.

At the June 3 council meeting, councillors reviewed a recommendation from the May 27 finance committee meeting, where chief financial officer (CFO) Adam Langenmaier outlined an initiative to close and consolidate a large number of existing reserves. When the reserves were being amalgamated, the sports and recreation committee reserve fund, with more than $45,000 in it, was omitted. Langenmaier, in a report to councillors, recommended the balance of the funds be transferred into the innovation reserve and that the sports reserve be closed.

Councillor George Doubt, who chairs the finance committee, said the initiative was part of a program that the CFO and finance committee have undertaken to streamline and modernize council’s policy on reserve funds. Doubt said the committee is aware Palm wants to see a program next year to update the sports hall of fame.

“My opinion is that money can come from the innovation fund,” said Doubt. “It doesn’t change any of the finances of the city, it basically changes where the funds are kept and where they are allocated. We should accept that because it’s a reasonable thing to do. I look forward to the new edition of the sports hall of fame.”

“If we don’t, and this is meant to be an ongoing event every term, those monies could get lost when the new person shows up next term and has nothing to work with,” said Palm. “I’d really like to keep it separate and have our own reserve for that purpose so this is ongoing and we are leaving a lasting legacy from our fine work.”

“We’ve had a fund that’s been there for nine years and no money has been spent and we’re not taking it out of reach for the sports hall of fame,” said Doubt.

Palm said to move the funds into the innovation fund, where he doesn’t have any place to put sports hall of fame funds that are accumulated while putting on the event, is counterproductive.

“I had to go to the Powell River Community Forest for the sports hall of fame the first time because I was not aware we had these funds available,” said Palm. “Having found that out, it’s the perfect place to use the funds this next year so I don’t have to go back to the community forest to add onto our great cabinet we have in the recreation complex, which costs a considerable amount of money, along with all of the other amenities the event needs.

“I am simply asking for a diversion of the funds for a good purpose to carry on the legacy of sports for Powell River and I will add at this time, in our fair city, sports are under attack because of COVID-19 and the inability of our youth to participate in sports. To take these funds and put them into an innovation account is counterproductive because the sports hall of fame isn’t new. It’s now ongoing and will continue to grow. We will honour those who have honoured Powell River.”

Palm said he would greatly appreciate the funds to be titled for sports so they could be put toward that use. He said he was against the transfer of the money into the innovation fund.

Mayor Dave Formosa said he had no issue with the money going in the innovation fund but it would be nice to see the funds allocated and have a footnote that X amount of dollars were for sports. He said as he went through the report, there was no reference to that.

Chief administrative officer Russell Brewer said there is nothing to preclude including in the coming sports hall of fame reference an allocation from a certain reserve to fund that committee’s work.

“There could be a clause in the terms of reference that speaks to allocating $40,000 from the innovation reserve,” said Brewer.

Palm said at the next committee of the whole meeting, the sports hall of fame reference would be brought forward and that revisions can be made and then presented to council.

Council carried a motion to close the sports and recreation committee reserve and that the final balance be transferred to the innovation fund reserve. Council then voted to adopt the updated reserve fund policy.

Sports and recreation money should remain for that purpose, says Powell River city councillor
Jun 1, 2021 9:51 AM