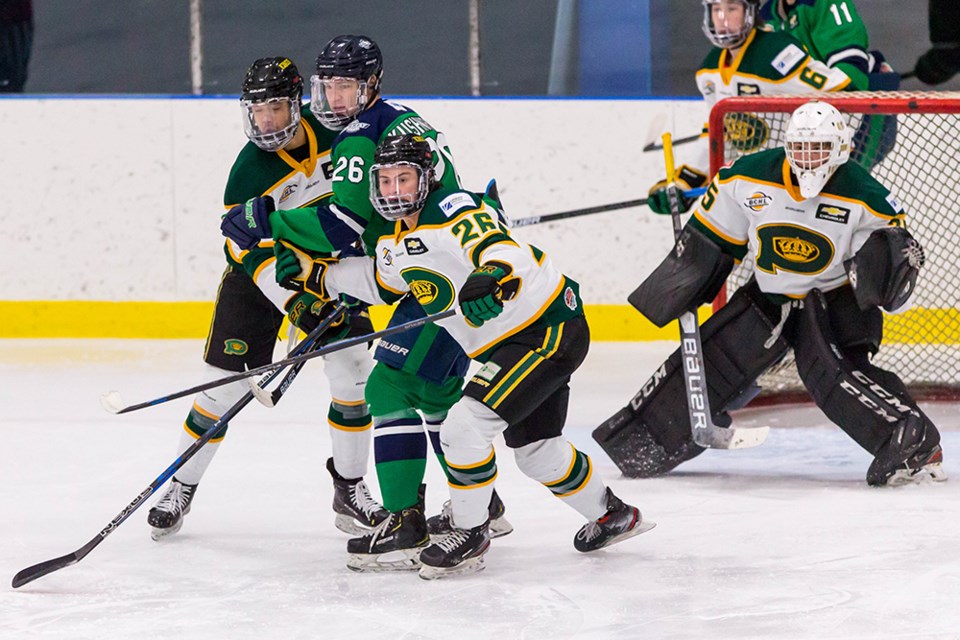 BATTLE FOR POSITION: Powell River Kings’ forward Dawson Milliken (26) fends off a Surrey Eagles player in front of goaltender Nick Peters, who was first star in the BC Hockey League game in Burnaby on May 1.Damon James photo

Surrey Eagles converted on two of three power play opportunities in a 2-1 win over Powell River Kings at Scotia Barn in Burnaby on May 1.

Holden Katzalay scored both goals for the Eagles, who led 1-0 after 20 minutes. The eventual game winner came at 5:04 of the second period. Jacob Bronkowski replied for the Kings just over a minute later, scoring at even strength on a set-up by Brody Johnston.

Goaltenders Thomas Scarfone (Surrey) and Nick Peters (Powell River) prevented any further scoring over the final 13:47 of the middle frame and third period. Peters, who was named the game’s first star, stopped 27 of 29 shots. Scarfone made 21 saves for the Eagles.

Kings were 0-2 on the power play in the afternoon contest.

Kings' next game is Monday, May 3, against Coquitlam Express, also at Scotia Barn. Game time is 8 pm.

Powell River Kings’ forward Caleb Parkhouse describes a hockey season like no other
Apr 23, 2021 10:00 AM
Comments