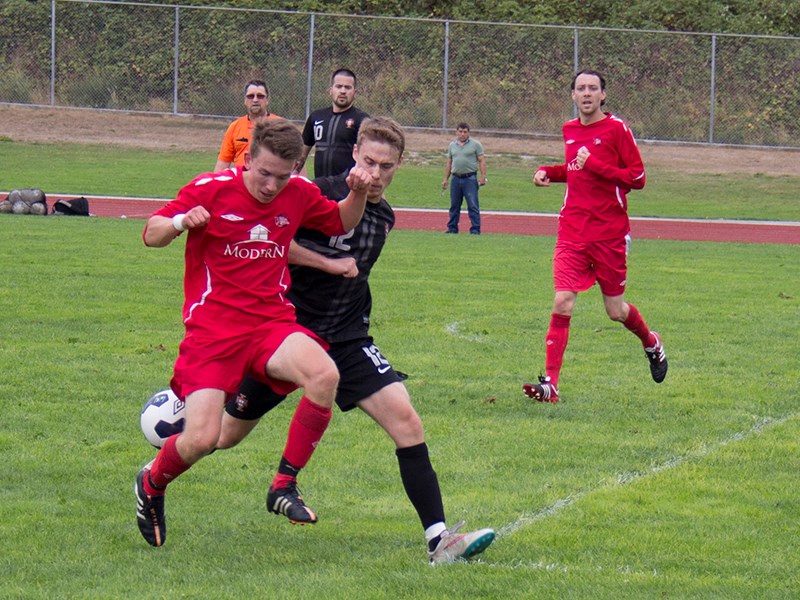 Powell River Villa newcomer Julius Ulrich compares the level of play in Vancouver Island Soccer League (VISL) Division 3A as slightly lower than the German league he plays in, which is similar to VISL Division 2, according to the 20-year-old Camber College student.

Ulrich hails from Buer, a small village of about 5,000 people not far from Hanover in northern Germany. He is one of many younger players on Villa’s current roster and someone the club was not aware of until he showed up for training.

“We're lucky to get players coming into town who we wouldn't normally have in our development pipeline, so anytime we get someone unexpected it's a nice addition,” said Villa head coach Chris McDonough. “He's a good team guy and brings a good skill set to the team.”

Ulrich is attending Camber College through a connection from his hometown.

“Clas Huntebrinker, the president of Camber College, comes from my hometown,” said Ulrich. “I know his parents and asked them for the opportunity to come to Canada, and they asked Clas.”

Ulrich arrived in July to work as a supervisor at the college’s outdoor summer camp for international students aged 10 to 16. He will stay in town as a student until January, then return to Germany where he plans to study medicine at university.

Ulrich also plays midfield for SuS Buer. He said differences in skill level between the Villa game and his German team are minimal, but when it comes to player commitment, systems and tactics, there is a disparity.

“German teams are a bit better,” he said. “It's not only the long ball, we try to play more small passes and system. This is the difference.”

One of Villa’s smaller players, Ulrich refers to the Canadian game as more physical. McDonough said he brings a different kind of style to the team.

“He's small, but his work ethic is really good; he's technically sound and a young player still,” said McDonough. “He has definitely brought something and if he gets more familiar with the style played here, he'll get better; I've noticed him improving.”

Ulrich has had to adjust to more than a physical game and different tactics. He said he found it unusual that practice attendance is not at strict as in Germany.

Ulrich was involved in setting up two goals during Villa’s lopsided 7-1 win over Cowichan Red Arrow on October 8 at Timberlane Park.

James Timothy and Brandon Rairie notched two goals apiece and Kurtis Dennison, Cullen Buholzer and Jake Kenmuir scored once each in the win.

McDonough said the team had been waiting for a solid win and that playing Cowichan, the last place team in VISL Division 3A, made it easier.

“That did make a difference, and we had a pretty good lineup,” said McDonough. "It’s probably the best lineup of the season we've had. I’d say it was a combination of the two.”

Including a 1-1 tie at Prospect Lake on October 1, Villa’s record is now two wins, one loss and one tie for 10 points.