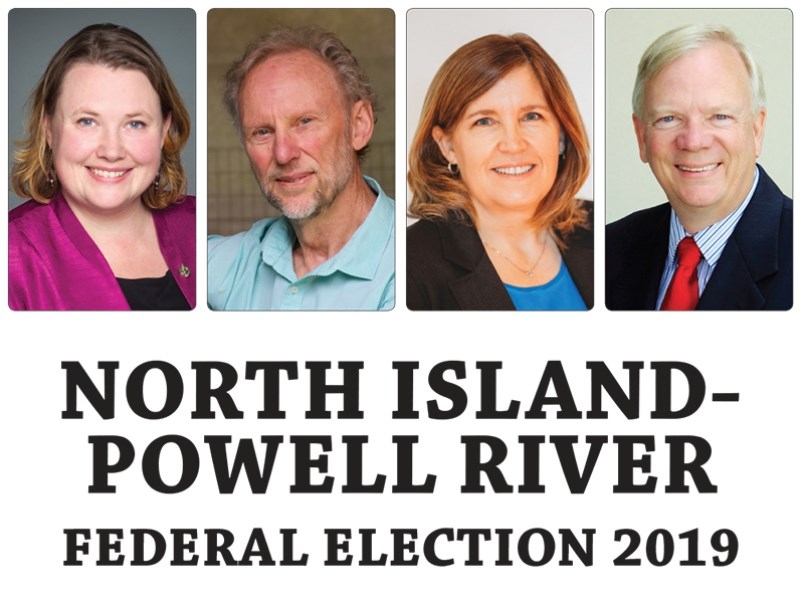 Candidates running in the North Island-Powell River electoral district have set out their plans for one of the biggest ballot issues facing voters in this fall’s federal election: climate change.

In July, an Abacus Data poll found a significant majority of Canadians recognize human-caused climate change as an issue requiring drastic government action. 81 per cent agreed or strongly agreed that climate change represents a major threat to the future of the next generation, while 58 per cent agreed or strongly agreed the climate emergency requires that governments adopt a “war-time scale response.”

Those numbers came as a surprise to the Liberal Party’s Peter Schwarzhoff, who said that when he carried his party’s banner in the 2015 election, voters were not as engaged with the issue as they are for this year’s contest.

“In 2015, I really didn’t get a lot of traction with that,” he said. “Flash forward to 2019, and all of a sudden, people are talking to me about climate change. I’m just shocked, and so excited.”

Referring to the federal government’s carbon tax, Schwarzhoff said anyone scanning the media would think the only thing the party has done is put a price on pollution.

“Our clean vehicles and fuels program is an example of something that’s had significant success, and that’s something people take for granted,” he said. “We’ve been putting a lot of money into mass transit infrastructure; that’s reducing emissions.”

But Mark de Bruijn, the Green Party’s candidate, said the Liberals’ efforts to date fall well short of what is required. His party wants to reduce Canada’s greenhouse gas emissions 60 per cent below 2005 levels by 2030, the largest reduction target of all the major parties.

That, de Bruijn explained, starts with halting projects such as the Trans Mountain Pipeline expansion, which he described as “dead in the water,” and switching over to a renewable energy-based economy.

“There will be a transition period where we phase out fossil fuels in a few years,” said de Bruijn. “Burning for fuel has to stop. No more infrastructure of any kind.”

de Bruijn said there is an incredible potential for employment and revenue in the transition.

“When we come out of the other end, it could be a golden age for humanity, living in a society that has un-polluting, and possibly even free energy,” he added.

However, de Bruijn said the Greens might lower their emissions reduction target to 45 per cent if the party props up a minority government, something Green Party leader Elizabeth May said she is prepared to do, even if that means supporting Andrew Scheer’s Conservatives.

“It may be a bit of a challenge to get there because of pretty entrenched ideological beliefs,” explained de Bruijn, “but Conservatives have some very good ideas. They are fiscally conservative, as are Greens. We have a lot in common with conservatives at their ideological core.”

By contrast, although the NDP has not provided a specific emissions reduction target, current MP Rachel Blaney said her party will not support a Tory government under any circumstances.

“I am not interested in supporting a Conservative government,” she explained. “We are probably going to go into some significant discussions about what we would need to see if we were going to support a Liberal government.”

“When we talk about good paying jobs, it’s finding ways to support transition by taking skill sets and applying them in a greener way,” explained Blaney. “It’s also about supporting unionized trades in transitioning, and making sure that supports are there to provide training, to provide EI benefits in a green economy.”

Blaney said she thinks it is also important to recognize indigenous communities have been left “holding the environmental bag,” on many occasions.

“Those communities that are on the front lines fighting for our environment, they’re the ones paying the legal bills,” she added.

Some critics, including the BC Green Party, say the BC NDP government green-lighting a multibillion dollar liquid natural gas project in Kitimat is at odds with the federal party’s promise to reduce Canada’s overall carbon emissions. However, Blaney said her party would implement measures to ensure carbon goals at all levels of government are being met.

Both the federal Greens and NDP say they would partially fund a transition to a renewable energy economy by immediately ending federal subsidies to the oil and gas sector, which amount to billions of dollars annually.

Instead of participating in an interview, the Conservative Party’s Shelley Downey sent the Peak a short statement via email.

“Our plan will be focusing on green technology instead of taxes to lower Canada’s emissions,” she stated. “Canada’s emissions are 1.6  per cent. We aren’t the problem but we want to do our part to help here at home and abroad.”