qathet region listed as severely unaffordable by the Canadian Rental Housing Index for people with low income
May 21, 2021 10:52 AM By: Alexander Cosh 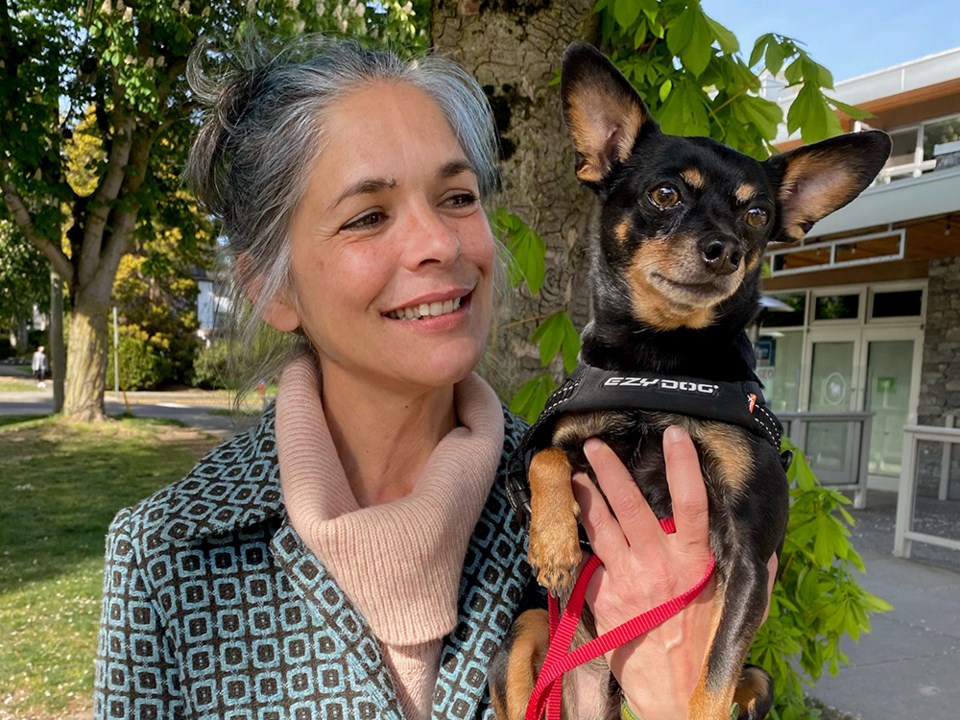 UNWANTED MOVE: Jennifer Rieper, with her pet chihuahua, Minpin, moved to Victoria when she couldn’t find reasonably priced accommodation in Powell River that would also accept her pet. She wants to move back and is waiting for the right opportunity.Eugene Vishek photo

Amid booming house prices, skyrocketing rent and limited affordable supply, viable housing options for qathet region’s already struggling renters are becoming increasingly difficult to find, according to some of those in search of an affordable place to call home.

This year, qathet has broken housing sales records month after month. Back in January, Powell River saw a 57 per cent spike in average sale prices, plus record-setting sales figures for February and March.

Meanwhile, the region’s affordability woes for renters have intensified. Canadian Rental Housing Index has listed qathet region as severely unaffordable for those on low incomes for several years, but renters say an already difficult situation is becoming even worse, particularly for those on disability and income support, but also for those with full-time employment.

Recently, the Peak spoke with two renters priced out of the local market.

Powell River resident Margaret Gisle moved to the area in January 2015 from Parksville. After spending several months paying $400 per month to sleep on her sister’s couch, Gisle eventually found a suitable rental unit in Lund in 2016 for $500 per month, where she lived until last April.

Issues with rent payment and, according to Gisle, the landlord not properly addressing mould and faulty appliances, resulted in a dispute that ultimately led to the Residential Tenancy Branch (RTB) siding with the landlord, and ordering Gisle’s eviction.

Gisle believes she was unfairly treated during the process because, she said, the RTB would not properly hear evidence for her reasons for paying rent late (Gisle said the unit did not have a working stove for two years).

Gisle said there were also issues with her former landlord refusing to fill out direct deposit forms for rent payments. She left the unit at the end of April and tried to move into a fifth-wheel trailer, but that proved to be too expensive.

According to a City of Powell River bylaw, the daily summer season rate for a full hook-up site at Willingdon Beach campground (including water, sewage and electricity) is $39.25 (including tax) for up to 14 days.

However, city parks supervisor Mike Kaban told the Peak that the Willingdon campsite should not be considered an alternative to rental housing or long-term accommodation.

“We do not rent out long-term spots, so we’re not a long-term rental agency,” said Kaban. “This is simply a campsite. It is important that our message is clear. The city campsite is not a long-term solution for a rental crisis.”

With the support of Lift Community Services, Gisle has now moved into a motel room. Previously, Gisle had been sleeping out at Dinner Rock, north of town.

“I was having such a hard time sleeping,” she said. “I was just exhausted.”

Gisle, who has lost five close relatives including her 32-year-old son over the past 18 months, supplements her disability income with part-time work as a care aide (individuals on disability support can earn up to $15,000 before their assistance is clawed back), but rough nights of sleep have made working long shifts difficult.

“I come to work absolutely exhausted,” explained Gisle. “I actually had to take the day off work because I was so tired.”

Gisle later found out she had broken her back in two places after a fall in her bathroom, which likely contributed to her discomfort. She is due to undergo consultation for surgery.

Even options for renting a shared bedroom were unfeasible. Gisle said she saw shared rooms listed for between $600 and $900 per month, more than what she paid in rent for a full suite at her old place.

Meanwhile, Gisle believes her old unit will likely be rented out to a new tenant for a much higher rate. She said rent for neighbouring units at the rental property increased by several hundred dollars at a time as other residents moved out during her five-year and four-month tenancy.

Jennifer Rieper has a roof over her head, but considers herself homeless. She shares a one-bedroom apartment in Victoria, paying $700 per month for a couch and closet.

Rieper moved to Victoria because she couldn’t find reasonably priced accommodation in Powell River that would also accept her pet chihuahua. While it might seem counterintuitive to move to a city where the median rent is even more expensive ($1,600 for a one-bedroom apartment), Rieper explained that there are at least more options available to renters in the provincial capital.

“I couldn’t find a place to live; I’m waiting to get back [to Powell River],” said Rieper. “I’m splitting the rent with a roommate, but this isn’t where I’m trying to be.

“Am I housed? Yes, but am I homeless? Yes. I’m not permanently housed. I’m not even in the right city.”

In January this year, after a decade of working, volunteering and raising three children in Powell River, 49 year-old Rieper and her estranged husband sold their Westview home. After the sale, Rieper found there was nowhere affordable for her to rent.

“There was nowhere to rent, not in a price range I could commit to,” explained Rieper.

She said she initially tried couch surfing with friends while she waited for workable options to appear on the market, but eventually decided to relocate to avoid the risk of exposing her friends to COVID-19.

Like Gisle, Rieper also considered the option of buying and living in an RV, until she realized how much it would cost.

Rieper explained that she originally moved to Powell River because at the time it was relatively affordable to buy a home. Now, she cannot afford to buy or rent.

Rieper believes that to address the local housing crisis, everyone needs to agree on accurate terms to describe what is happening.

Rieper also wants to see those who are homeless or precariously housed given the opportunity to speak for themselves in public forums, and said a local renters’ union could also provide struggling renters with a voice.

“Let people who are homeless line up and give them a mic for a minute and a half,” said Rieper. “Half of them will be shouting into it because they haven’t slept properly in months. And it’s not their fault. At some point a brain can only take so much.”

Next week, the Peak will speak to a community service worker about how the motivation for some landlords to sell is leaving some renters unable to find affordable housing options. Elected officials will also be interviewed about how booming house sales and steep increases in rent are narrowing affordable housing options for struggling renters, including those on middle incomes.