Fitness facility will be able to continue operations in its current location
Apr 16, 2021 4:20 PM By: Paul Galinski 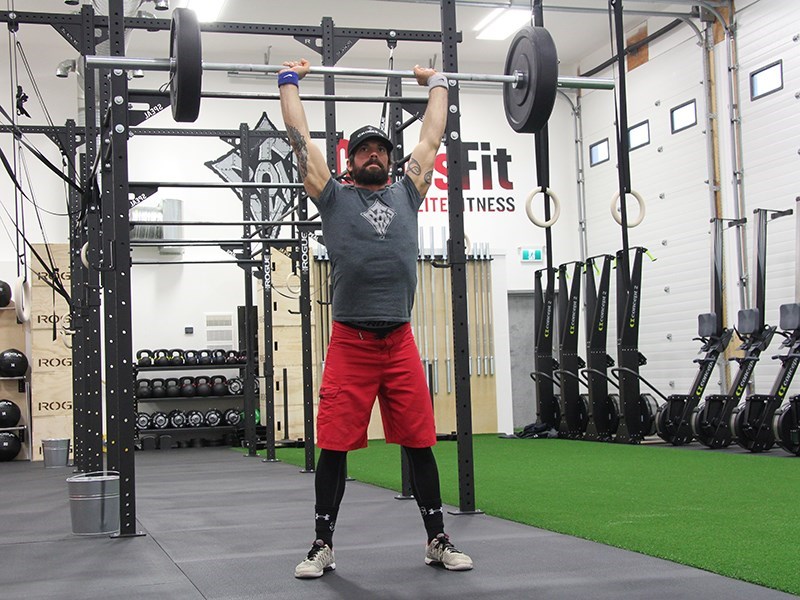 COMPROMISE FOUND: PowTown Crossfit owner Eddie Charlton has been given a three-year temporary use permit to remain at his Fernwood Avenue location, even though it does not comply with City of Powell River zoning. The permit is renewable for an additional three years, so if the business meets conditions of the permit, it can remain at the current location for six years before having to apply for a new permit and apply to change the zoning.Peak archive photo

City of Powell River council has granted PowTown Crossfit with a temporary use permit that will allow it to continue business at its location at 4504 Fernwood Avenue.

At the April 15 city council meeting, councillors voted to grant the three-year permit that would allow a gym or fitness facility not exceeding 48 per cent of the gross floor area of the building on Fernwood Avenue.

According to a staff report, the city’s licence administrator advised PowTown Crossfit that the business was in contravention of the zoning bylaw, which limits a gym or fitness facility in an industrial zone to occupy 20 per cent of the gross floor area of a building up to a maximum of 500 square metres. PowTown Crossfit occupies 48 per cent of the building, so the business was advised of the need to decrease the size of its premises or relocate, according to the staff report. The business chose to apply for a temporary use permit to allow continued operations in the same premises and location.

The staff report also indicated there had been concerns raised about noise, traffic and parking for operations of the business. Staff recommended the temporary use permit require the applicant to conduct all business activity inside and maintain closed doors when amplified music is used.

Councillor Rob Southcott said that as was discussed at a previous committee of the whole meeting, the temporary use permit is a solution to what has afforded city staff and councillors, and particularly mayor Dave Formosa, a lot of work over a number of years.

“This is hoped to be a solution,” said Southcott. “There are seven very clear requirements in this temporary use permit, which address a lot of the challenges experienced by council and some neighbours with this business.

“We’ve received a lot of letters of support for this business. It’s a good business supporting the health of the people who patronize it. I’m hoping these requirements, which are written very carefully, will provide clear guidelines so the problems we have experienced in the past are to be ended.”

Southcott said because those requirements were in the permit, he supports it.

Councillor Cindy Elliott said staff had done an amazing job of hearing the community’s concerns and attempting to increase the ways in which this particular business is regulated through a temporary use permit.

“I am of the opinion that the temporary use permit gives us an excellent framework to address community concerns, as well as allowing business to go ahead, which is difficult during the pandemic,” she added. “That type of business in particular has been hit very hard. There are a lot of people who really want that facility to go ahead. Staff has done a wonderful job of balancing all of the interests and I am in favour.”

Councillor Maggie Hathaway said the city received a tremendous number of letters from people who participate at PowTown Crossfit. She said the owner has created a good business and customers appreciate what is provided.

Hathaway said one of the letters was from one of the original complainants, who said things have improved.

“Hopefully, we are going to reach a compromise that works for everybody because it is a great business and I would be loath to shut it down,” said Hathaway.

Councillor Jim Palm said he wanted to compliment all of the people who sent in letters.

“It has been ongoing for a great amount of time and I am very optimistic that a compromise can be met,” added Palm.

He asked if a meeting had occurred between residents and the owner, but Palm was told there had not been a meeting.

“That’s unfortunate, because the key to resolution is communication and getting everyone on the same page,” he added.

He said from what he’s read, the temporary use permit is for three years. A three-year extension can be applied for after the original term. At the end of that time, the proponent would have to make a brand new application to the city for a new temporary use permit.

Palm asked corporate officer Chris Jackson if the city had the ability to rescind the permit for non-compliance.

Mayor Dave Formosa said the proponent is aware the permit could be rescinded for non-compliance.

He said he wanted to thank the neighbours for working with staff and council on this case. He also thanked owner Eddie Charlton for his involvement in trying to resolve the matter.

“Hopefully, we will not need to relook at this and everyone will play according to the rules,” said Formosa.

Council voted unanimously to provide Charlton with the temporary use permit.

Temporary use permit under consideration for fitness facility in Powell River
Apr 7, 2021 4:23 PM