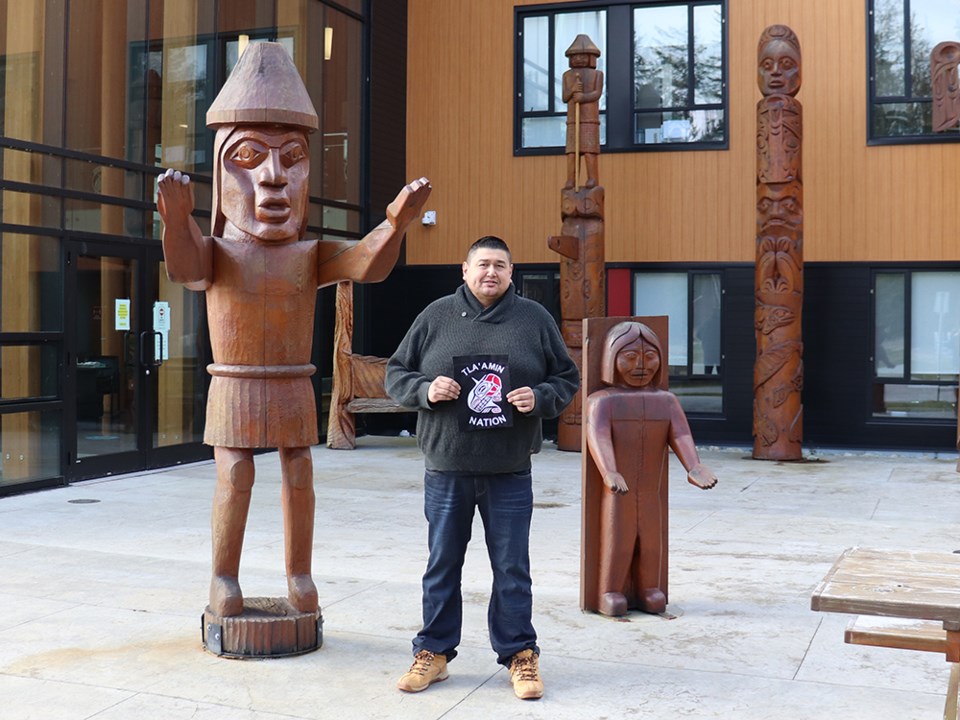 That change, enshrined back in 2016, freed the nation from the Indian Act, legislation that had previously dictated its relationship to Canada, and which the Tla’amin website describes as “a source of serious trauma for all First Nations people.”

Pages of the act were symbolically burned the night Tla’amin first celebrated its self-governing status. In the years following, the nation has grown its economy, developed tourism operations and renewed efforts to maintain the Tla’amin language.

In March, the Peak interviewed Tla’amin hegus John Hackett, who was elected last fall, to discuss the nation’s five-year self-governing anniversary, and what lies ahead over the coming years.

Peak: What have been some of Tla’amin's biggest successes and challenges as a self-governing nation over the past five years?

JH: One of the biggest successes Tla’amin Nation has achieved is reestablishing our identity, transforming away from the Indian Act as Sliammon First Nation to Tla’amin Nation. Tla’amin Nation members are able to enforce Tla’amin laws and regulations that hold our nation values.

We have developed a house-post-government-style that includes Lands and Resources, Finance and Administration, Community Services and Public Works. A lot of community-driven plans have been developed such as a land and water use plan, comprehensive nation plan, as well as our own constitution that was useful in developing our laws.

The most challenging fact is that our land base is less than one per cent of our traditional territory. With the remaining area within Tla’amin, [the nation] has little or no input into the planning or decision-making. There are many sacred archaeological sites that are being disturbed by private or commercial development. There appears to be little to no consequences for disturbing these sites.

There is light at the end of the tunnel. Nations that have ratified modern treaties in BC have joined together to form an alliance, as we all are facing the same challenges and hold the same values. So the best solution is to join together and strategically focus on priority areas, and use this group as a unified voice to get the attention of the government on all levels: federal, provincial, regional and local. We are rights holders in our territory and want to work in good faith to move forward to reconcile our evolving working relationship.

Our nation has always expressed an interest in meaningful co-managing agreements to help monitor, enforce and participate on a planning level, and we do have great working relationships with the other government bodies mentioned, but have so much more to expand on, so our interests aligned.

Peak: Looking ahead to the future, what are some projects and goals you are looking forward to seeing materialize over the next five years?

JH: Our nation has been fortunate that we have community-driven plans that highlight many of the priorities, not only socially but economically. So yes, we are advancing forward in many areas. Our nation has expressed the need for our own elders care facility, youth centre and new housing.

A lot of planning and input from our health team envisions what level of service and number of clients we should aim for; cost of infrastructure, service, agreements and certification it takes to achieve the intended goal. There is also a projected youth facility located at our nation’s soccer field site. Plans are to have a walking oval around the soccer/baseball field, as well as a number of other facilities.

There is more community consultation needed to deliver such a project to a level our nation members deserve. Tla’amin is developing new housing to address our housing shortage and completing an inventory of repairs needed to nation houses to prioritize repairs.

These are some of many projects that are in development to meet some of the community’s goals set from community-driven plans.

Peak: Overall, what are some other changes that becoming a self-governing nation has brought to the Tla’amin community?

JH: We are still in the early implementation phase; we are in year five. We spent many years under the restrictive system under the Indian Act as Sliammon First Nation. Our nation is transitioning away through laws, regulation and policy development that are drawn from community-driven plans such as the Comprehensive Nation Plan, land use plans, et cetera. We have so much more choice and flexibility as a self-governing nation, but it takes time to translate this into tangible results. Our planning is a good start.

We have traditional knowledge through our oral history and Ta’ow, teachings that this is our territory and our homelands. We have maintained our core foundational values and are reviving our cultural practices more and more despite the ongoing effects of colonialism.

Peak: A recent edition of the Nehmotl Newsletter noted several changes and updates within the administration. What do these changes mean for the nation moving forward?

JH: The nation is reviewing the organization chart, as we are developing new positions to serve the community. We are doing minor shuffling of positions that fit under other programs and services. For example, our growing inventory of equipment and related jobs are moving under a public works division. These changes will not only make administrative reporting more efficient, it will make the programs and services operate more smoothly to serve our members.

Peak: Tla’amin Nation recently announced it was awarded a proposal to build a new organics facility to produce class A compost. What does this project mean for the nation?

JH: Tla’amin was successful in securing funding that is time sensitive to build a class A compost facility but is still in the bidding process for the organics from qathet Regional District. That is not finalized yet, so it is too early to tell if this project is moving forward. It does fit in with our goals to be self-sustaining, grow our own produce, reduce garbage and be environmental leaders.

Peak: Following the state of emergency over the COVID-19 outbreak last fall, how else has the pandemic affected Tla’amin? Has being a self-governing nation been important in determining your response to the pandemic?

JH: Very scary times our nation endured during the months of September and October. Our elected leadership called a state of emergency that gave the nation the authority to call a community lockdown due to few of our members who got COVID-19, including a few of our elders.

Our nation really proved that we live by our statement: one mind, one heart, one community. We had staff and volunteer community members volunteer on all aspects to make sure that during this lockdown, everyone had all the necessities to get by. Food boxes, cleaning products, many other items were delivered to follow all safety protocols.

At 7 pm every night everyone would bang their drums. If they had no drums, pots and pans were used to bang. The first night this took place I could not help it, I was overcome with emotions of how we all can unite under such stressful times. We are related or friends with the members who got infected, it was a very emotional time. We want to do everything to avoid another COVID outbreak.

Peak: What does the province’s passing of UNDRIP [United Nations Declaration on the Rights of Indigenous Peoples] legislation in 2019 mean for Tla’amin as a self-governing nation?

JH: The provincial legislation to implement the UN declaration provides us a real opportunity to have a more meaningful relationship with the province that will improve treaty implementation and enhance our role in provincial decision-making in our territory. In many ways the province has not lived up to its end of the bargain under our treaty. This provides the best chance we’ve had so far to get the government-to-government relationship right.

The federal government is in the process of enacting legislation to implement the UN declaration, and [recently] we saw the news that the City of Vancouver is looking to implement the UN declaration as well at the local government level. This is very encouraging, and I’d like to issue a challenge to both Tees’kwat (City of Powell River) and the qathet Regional District to do the same.

It’s not something to be fearful of, it’s simply about respect for the original people and the history of this beautiful territory we all get to call home.