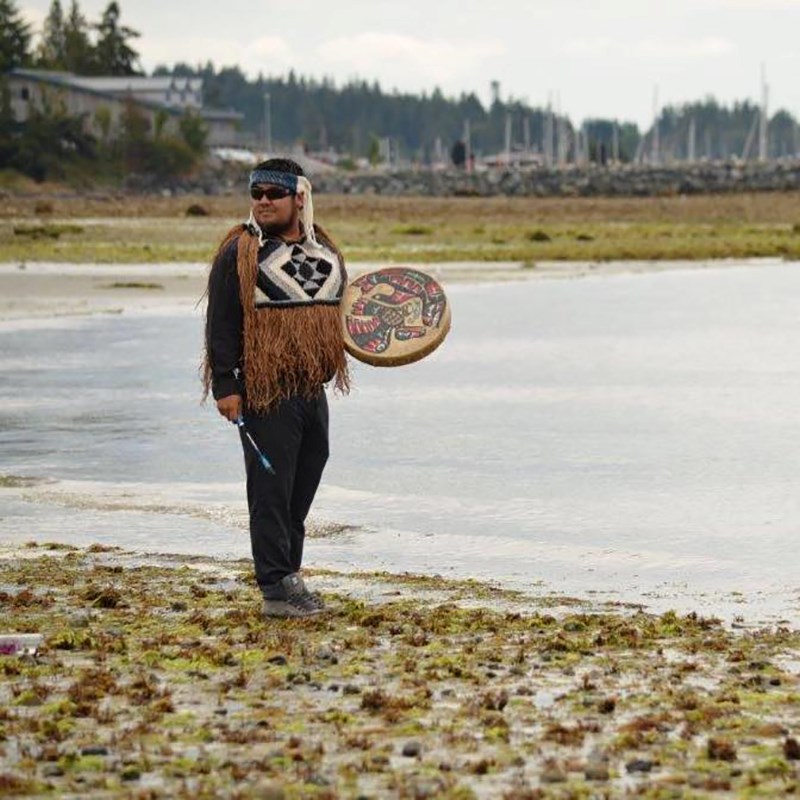 “It’s certainly exciting to be working in this role as cultural heritage manager for the nation,” said Kespahl. “And actually it was all the work that was done leading up to us becoming a self-governing nation which led us to finding the songs that were in the archives in many different museums around the world.

“A lot of the work that was put into our treaty resulted in us finding these archived songs, and it’s been really exciting to bring those to life.”

Since Tla’amin was freed from the traumatic effects of the Indian Act in 2016, the nation has continued to rebuild valuable pieces of its heritage which, explained Kespahl, has also inspired interest in the nation’s cultural traditions among Tla’amin youth.

“It’s really been exciting over the last couple of years seeing the growth of the nation both as a self-governing nation and culturally as well,” said Kespahl. “A lot of young people are stepping up and want to tell about who they are as Tla’amin people. And I think being a self-governing nation has really opened doors for our youth and opened their eyes.”

In the years leading up to Tla’amin becoming self-governing, explained Kespahl, the nation made key rediscoveries of important audio archives.

“In the 2000s, the research department at the [then] Sliammon Treaty Society were researching all across the world and they came across a CD of my great-great-grandfather, his name was Bob George, and that was in the Library of Congress in Washington DC,” said Kespahl.  “It was done by Frances Densmore, and she was an anthropologist, and her focus was on music, and it culminated in this book called the Music of the Indians of British Columbia, and that was all done in 1926 in the hops fields in Chilliwack.”

The fact that the recording of George was made in the Fraser Valley and ended up in the US capitol, said Kespahl, itself speaks to a piece of Tla’amin history.

“Quite a few of our people during those days, it was really hard to come by work, and they travelled to berry farms and hop fields, all the way down to Tacoma and Bainbridge Island, Seattle, Chilliwack, everywhere,” said Kespahl. “I guess at that time my great-great-grandfather had also been down there working, and Densmore was there recording, and she recorded him, so she was able to record 16 songs from him, and that was published in that book.”

At the time of the audio archive rediscovery, Kespahl was working as a youth outreach worker for the treaty department, and saw firsthand the revival of some of Tla’amin’s musical traditions when the recordings were returned to the nation.

“We brought songs out to our community and started singing them, and some of our oldest elders here did remember some of the songs that were being sung, which was really amazing,” he said. “They had remembered singing it when they were just a young child.”

“He really encouraged me to go out and find our songs in the museums, and also to start composing songs, because he shared the story of how when he was a kid, they almost lost their culture, completely,” said Kespahl. “But they started listening to old tapes and memorizing old songs, and composing new songs for the people, and when they came to our community on that canoe journey, they showed such strength in their culture. So that’s what led me to song composing.”

Kespahl came up with his first song in 2008, and initially shared it with his family. Soon after, however, Kespahl’s music was shared with the rest of the nation.

“Since then I’ve composed dozens of songs for the nation,” said Kespahl.

As well, he is looking ahead to future generations to ensure Tla’amin’s culture is preserved for decades and centuries to come.

“We’re always encouraging our young people to become more involved with the culture, so that’s the work we’re doing, and we’re trying to save our culture for future generations,” said Kespahl. “We’re seeing a lot of our young people really interested in learning our culture, which is awesome to see. But it’s all about teaching the young people who we are as Tla’amin people.”

For many years, explained Kespahl, the violent and traumatic effects of settler colonialism, residential schools and the forcible displacement of Tla’amin people from their lands left many in the nation without an upbringing that connected them to their culture and heritage.

“We really want to instil that in our young people and make sure we move in a different direction and we start teaching them our ways so we can change the direction,” said Kespahl.

In fact, Kespahl’s name, a traditional one in Tla’amin language, is itself part of his nation’s cultural heritage, connecting Kespahl to his ancestors.

“Kespahl was a name given to my father when he was a young kid and that was his great-grandfather,” he said. “And then that name was passed down to me. I actually prefer being called by my traditional name over my English name, to be honest.”

On Wednesday, April 7, at 4:30 pm, Kespahl will be discussing traditional Tla’amin songs during a Powell River Public Library presentation. Those interested can tune in via Zoom, and may register by emailing Mark Merlino at mmerlino@prpl.ca.

“There are a lot of people out there doing this work to revive our language and our culture and our songs,” said Kespahl. “I want to share that story, and share some of these songs with the Powell River community, share the story of where they come from and just have a good cross-cultural sharing event.”