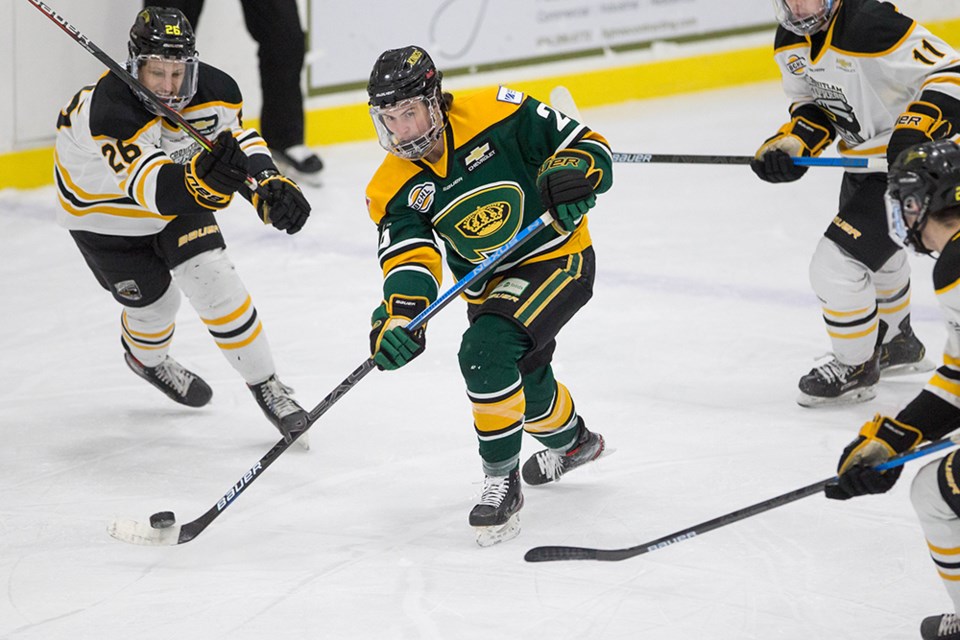 A trio of Coquitlam Express players close in on Powell River Kings' forward Dawson Milliken [centre] during a BC Hockey League game at Scotia Barn in Burnaby on Saturday, May 8.Damon James photo

Powell River Kings’ shortened BC Hockey League (BCHL) season ended on May 8 the same way it started on April 3, with a loss to Coquitlam Express, this time by a score of 7-2.

After Coquitlam opened the scoring at 14:58 of the first period, Ben Brunette responded for Powell River on a power play at 16:29, tying the score at one goal apiece heading into the first intermission. Ethan Riesterer and Jacob Bonkowski picked up assists on Brunette’s goal.

Coquitlam took control of the game in the second period, scoring twice, then added four more goals in the third period before Raymond and Caleb Parkhouse set up Aaron Neal for the final goal of the game, and the Kings’ season, with six minutes remaining.

Powell River outshot Coquitlam 31-25 in the game, and won the season series six games to four.

Kings will finish second or third in the BC Hockey League Burnaby pod with a record of seven wins, 11 regulation losses, one overtime loss and one shoot-out loss for a total of 16 points.

Surrey Eagles (16-2-1), currently with 33 points, have already solidified top spot in the pod with one game remaining against the Express on May 9. Coquitlam (6-10-3) has 15 points and will take over second place with a win in the final game.

On April 27, the BCHL announced there would be no playoffs at the conclusion of the pod season, which has unfolded in five venues across the province, including the Kings, Eagles and Express at Scotia Barn in Burnaby. The league determined it was not feasible to conduct a postseason due to challenges surrounding changing cohorts during the COVID-19 pandemic.

“Since we were shut down in November, our priority was to provide our athletes with an opportunity to showcase themselves to NCAA coaches and NHL scouts.” stated BCHL Executive Director Steven Cocker. “We are thrilled that we were able to reward our players for all of the hard work they put in during what was a difficult and challenging season. We look forward to returning to a more normal schedule next year and once again crowning a BCHL champion.”

Individual awards for each pod, including most valuable player, top defenceman, top goalie and top rookie, will be announced at a later date.

Powell River Kings’ forward Caleb Parkhouse describes a hockey season like no other
Apr 23, 2021 10:00 AM