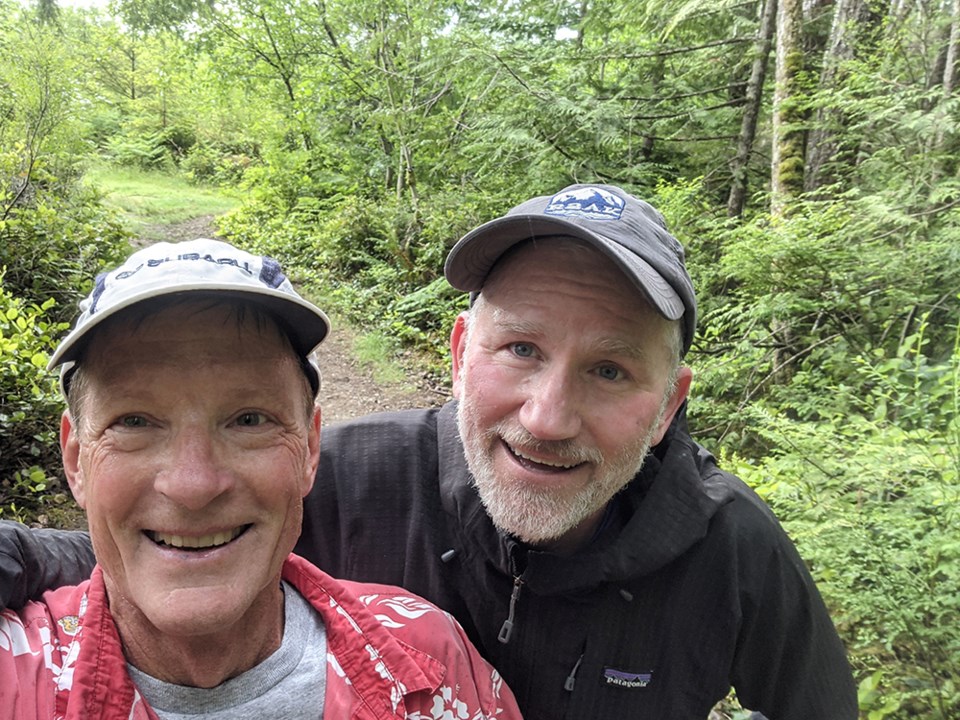 CHALLENGE COMPLETE: Runners Ean Jackson [left] and Ken Legg recently bagged the last street in their challenge to run every street in Powell River using an app called CityStrides. Legg had a head start, but the pair decided to complete the mission together.Ean Jackson photo

Local friends Ean Jackson and Ken Legg have jointly claimed the unofficial “Forrest Gump of Powell River” title by becoming the first people to run every street in the city.

Jackson, who recently moved to Powell River and undertook the challenge as a way to familiarize himself with his new home, bagged his final street on May 30 with Legg.

“[Legg] had apparently already done, unbeknownst to me, lane seven [at Westview Ferry Terminal), and he hadn’t done the Marland Motel up here; it’s just a little entryway,” explained Jackson. “So I did that with him, and he did that with me, and now we’re done.”

According to Jackson, Legg had already bagged almost every street by the time Jackson moved to the city. Jackson said Legg had stopped because the remaining streets included parking lots and obscure side roads.

After a parlay over a beer, Jackson was unsure whether the pair would finish the challenge together, or whether he might be scooped by Legg.

“I don’t think he was paying any attention to it, so then he did, and [my wife] said, 'he’s almost there, you better get hustling,'” said Jackson.

Ultimately, however, a truce was called, and the two friends finished the final streets together.

“It was great. It was just so funny because he could have killed me at any time,” recalled Jackson. “We’ve got it. You can’t take it away now.”

The question remains: who will finish third? Since going public with the challenge, Jackson has noticed an uptick in activity on the app CityStrides, which tracks each local user’s progress, and ranks them on a leaderboard.

Jackson’s wife, Sibylle Tinsel, had been sitting in third place, but said an anonymous user recently passed her after the user suddenly jumped from having completed just five per cent of all local streets to over 30 per cent.

It is unclear whether the mystery user simply imported data for multiple runs into the app in one go (explaining their sudden leap in progress), or whether foul play, perhaps in the form of an e-bike, may be afoot.

Meanwhile, Jackson has his sights set on a new challenge: running all the trails in the city. He said he has already made significant progress in that endeavour, and can be easily recognized out on the trails by his signature red floral shirt.

“I’ve got them all pretty much to Nootka, but what shows on the map is not reality,” said Jackson. “There are so many trails. There are way more trails than CityStrides shows.”

Jackson added that he will gladly go for a run with anyone else who would like hints and tips on how to street bag.

“You don’t have to be a runner to have a blast with this,” said Jackson. “It’s perfect for dog walkers or anyone looking for solo exercise during times of COVID.”